The Uncommon Debate: The color of the President’s tie

Discussions surrounding the Presidential debates have spanned the gamut of topics from healthcare and foreign policy to Big Bird and binders. Pundits correctly predicted that Obama would take a more offensive stance after his lackluster encounter with Governor Romney in the first debate. They’ve posited how each may address sensitive and pressing issues facing our country. But no one has yet to pontificate on the color of each candidate’s tie! Why does this matter? Well, as David Ogilvy once said, “Everything communicates,” and there is a definite psychology of color that impacts the voting public’s perceptions of each candidate. With dark suits and white shirts a fait accompli, our candidates are left with their tie as the primary visual cue to distinguish themselves (and send an emotional cue affecting their image). Experts on the psychology of color note that blue is associated with traits including wisdom, truth, loyalty, security, responsibility, and focus and is perceived to be calming—all worthy for a candidate in a country fed up with rhetoric and seeking authenticity, national security, and financial stability. 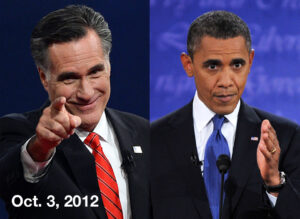 The candidates choose their color  Red demands attention and symbolizes dominance, which also serves a candidate well who wants to reinforce their presidential leadership abilities. While the “red states” are associated with the Republicans and “blue states” with the Democrats, the first two debates have proven that the candidates aren’t consistently following their party lines with regard to the color of their ties. Romney’s overtly aggressive stance in the first debate was appropriately reinforced by his choice of a red tie. Obama’s blue cravat, while mirroring his calm demeanor, didn’t help offset his lackluster performance and underwhelming tone when it came to conveying leadership. 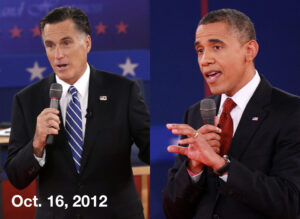 Debate two: a change of color  It’s no surprise then that when President Obama came back in debate two, guns a blazing, his choice of a red tie helped prop up his presidential leadership image, while Romney’s choice of blue may have helped ratchet down what some perceived to have been his overly aggressive tone in the first debate. Looking toward this evening, my prediction is that both candidates will focus on conveying strength and leadership to lead our country through challenging foreign policy and security matters, which would tilt the tie color to red. On the other hand, given that both candidates have now both fallen prey to the aggressive rhetoric the American public despises, they may now each vie for the “high ground,” tilting the tie color selection back towards blue. If I had to vote, my bet would be that the color of the ties will match the color of the candidates respective party. Obama blue and Romney red. It’s time to tie one on! Beyond the tie, it appears there is one additional men’s accessory in the arsenal to differentiate presidential candidates.