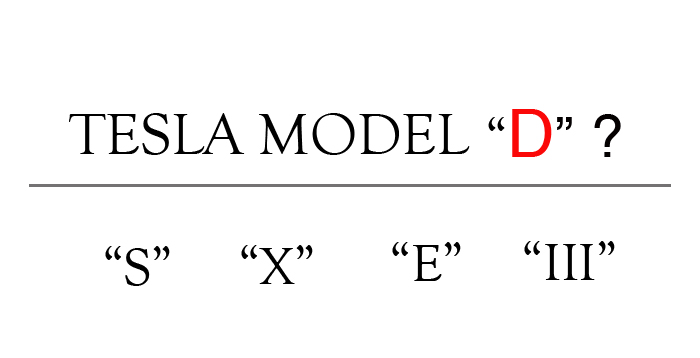 With innovative companies, product announcements have become as much an opportunity for “innovation” as the products themselves. On October 1, Elon Musk Tweeted that “it was time to unveil the D and something else.”  With Elon’s scheduled announcement tonight revealing the answer to his teaser Tweet, what do you think the folks in the Tesla naming labs were thinking when they chose Model “D? Let’s start with what we know so far… “S” is the Sedan…or Sport Sedan, of course. “X” will be the 4WD Crossover…You get it––each corner of the “X” in the name signifies a drive-train. “E” was to be the moniker for the “E”ntry level “E”conomical model ..until a rumored trademark conflict led to the July announcement to name it the Tesla Model III instead. And so for tonight, here are four possible predictions of what “D” and “something else” might mean at Tesla: 1. “D” is for “4wDRIVE” The Model X is the next car to officially roll out, built on a new 4WD drive platform. So why not give the Model S even more super road-hugging and handling skills with all wheel drive? 2. “D” is for “Driver Assist” Many mainstream car brands offer sensors and systems to alert drivers when a car veers into another lane or automatically brakes when approaching too close to a car ahead. For a car as technologically sophisticated as it is, Tesla is markedly behind with advanced safety features such as these.  This type of improvement should be expected on upcoming Teslas, but shouldn’t be the basis of a major announcement…unless “driver assist” means… 3. “D” is for “Driverless” While Elon Musk recently announced that Tesla was testing self driving cars, tonight’s announcement may be a proclamation that Tesla will be the first to hit the road with them commercially. 4. “D” is for “Droptop” It’s been 6 years or so since Tesla debuted with its Roadster Sport. With a limited production of 2,400 vehicles, don’t you think it’s time Tesla offered a convertible for the rest of us? While we don’t yet know what the “D” stands for, we can be sure that  whatever Tesla is announcing will be highly “D”esirable.  It surely won’t be “D”iesel.   I purchased a Tesla Model S this past March and continue to chronicle the ownership experience.